If you have been working with Xamarin for a while then you are probably familiar with the site https://developer.xamarin.com and haven’t been there in a while, you are in for a treat. The docs have been migrated to the new Microsoft Documentation Platform.

The new platform is great. Pretty much every technology that you would want to work with is here. In this case we go to the Xamarin section and we have all the docs handy. Lets dive into the “Getting Started” document. 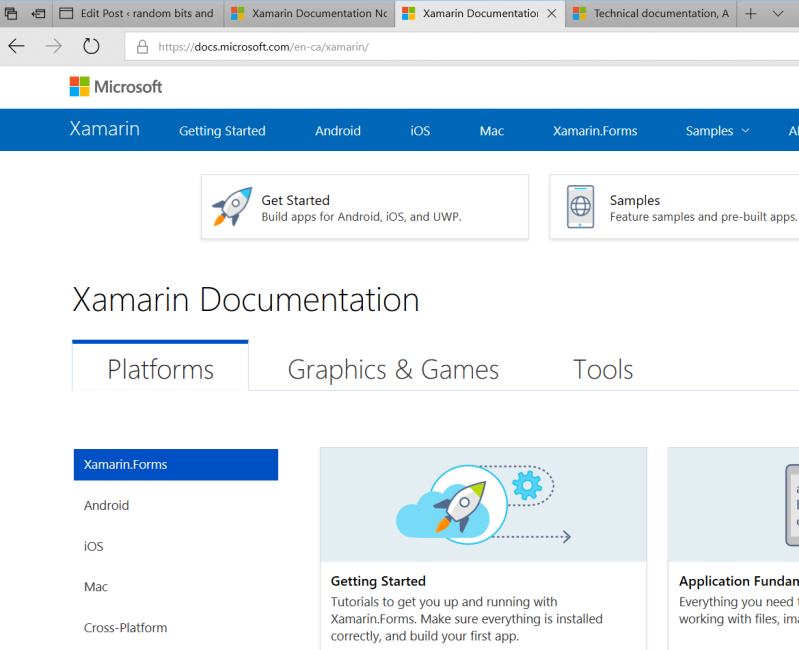 Inside each of the documents the page is divided into three columns. The left column is a table of contents for the current document and the right hand column contains indexes into the sections of the current page. The middle column has all the information. 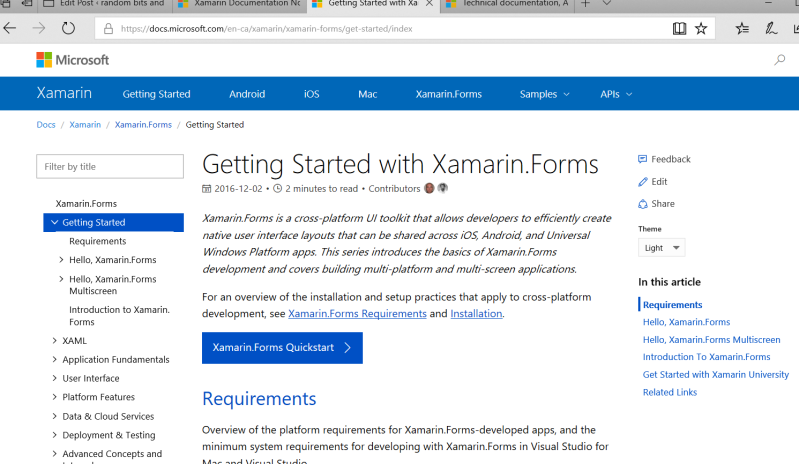 One of my favorite features is at the very bottom of the left hand column. If you are traveling and are going to be offline for a while, there is a link there that will create an offline pdf file that you can download to your own computer. I use it every time I fly somewhere.

Also, if you feel like contributing, there is a link at the bottom to take you to the GitHub repo where you can submit issues with the documentation and even submit new articles and updates. If you are so interested, make sure to read the contribution guidelines first!

One question that I have had a few times now is how do I integrate platform specific implementations of services into the Prism Framework? It’s not hard, in fact, you don’t have to do anything at all! Let’s take a look at how it works. I am going to focus on the Unity container: it’s my favorite for no other reason than it was the first container I started using and it has always worked well for me across all different .NET projects. The other containers have similar capability.

All the platforms have very similar capabilities, especially in the case of Bluetooth, Bluetooth LE, GPS, text-to-speech etc., but each of these capabilities requires a platform specific process of consuming them. I am sure most know that an interface needs to be  created the portable/shared project and then platform specific implementations in each of the platform projects. But here is a quick recap of what it looks like.

Create your Xamarin Forms project and use nuget to add Prism.Unity.Forms. The latest stable release at the time of writing was 6.3.0. Once you have your project created, you would need to create your interface definition. Everyone loves to use text-to-speech for these kinds of samples, so let’s do that.

For each of the platforms the parts that we are interested in for the sake of the article is pretty much the same. I won’t reproduce the actual speech code here, but if you are interested in how it is done, there is a good sample on the Xamarin developer site.

Here is what the class looks like for each of the platforms.

As promised, each of the platform implementations look the same and this is the pattern you would follow even if you weren’t using a framework like Prism. The key is the attribute just above the namespace statement that registers your implementation with the Xamarin Forms dependency service.

Normally we would consume the service in the view model using the following pattern:

The above looks ok, but it does tie your view model to the Xamarin Forms DependencyService. This makes things a little more painful for testing.

What Prism Does For You

What Prism does for you is remove that dependency on the Xamarin Forms dependency service and allow you to pass in the service as a constructor parameter like follows:

How does Prism do that? It creates a special extension to the Unity container (similar capabilities exist within the other containers) that basically say to the container if the requested interface isn’t registered in the container, look for it in the Xamarin Forms DependencyService. That’s pretty cool! No additional work is required and you right away have a more testable and maintainable solution. If you are interested in seeing what this looks like, you can look at the
DependencyServiceStrategy class and the ConfigureContainer method in the PrismApplication class.

Whoot! Xamarin Dev Days is coming to Vancouver! If you are new to Xamarin and mobile development, this is a great way to jump in and get started and see what all the fuss is about.

Clear your calendar for Saturday September 23 and sign up at the registration page. You can also join the Vancouver Windows Platform Dev Group to learn even more (disclaimer: I am a member and have presented on Xamarin a couple of times).

If you aren’t in Vancouver, there are a number of locations being hosted around the world. You can check them out here.

Finally, after covering UWP and iOS we are going to take a quick look at Android. Android seemed to be the easiest to get setup for me. All I had to do was to make the declaration of the deep linking to an IntentFilter attribute on the MainActivity class. When you add the IntentFilter, Xamarin will automatically update the manifest file for you.

In the code below, the most important items are the DataScheme and DataHost attributes. They are the ones that tell Android that the declared protocol is handled by the application.

Unlike iOS and UWP, Xamarin Forms routes the event back to the portable Application class and the OnAppLinkRequestReceived function. From there you can process the access token:

In our last post, we looked at what we needed to do to setup our shared/portable project to authenticate with Autodesk Forge. Almost all of the code the important code is in the shared area, but we do have to do somethings within each of the platform projects. Lets check out UWP.

The first thing that I do is go into the Package.appxmanifest in the UWP project. Once you are in it, click on the “Declarations” tab. On this tab, you can declare lots of different things for your app: able to pick files, camera settings, background tasks among others. The one we are interested in is protocol.

Select protocol and add it to the list of the supported declarations. Give the protocol a name check “ExecutableOrStartPageIsRequired”. For the name, make sure that you give it something unique. Perhaps an abbreviation of your company followed by some kind of app designation.

In the UWP platform project, you need to override the Application.OnActivated function to handle the deep-link. Normally Xamarin Forms will just route the URI request to OnAppLinkRequestReceived, but it doesn’t seem to be working for UWP (or iOS). So what we will do, is just call in to a new entry point which then delegates to the protected function.

Then we can go back to the application object in our portable library and fix up the OnAppLinkRequestReceived function and the manual entry point we show above that is used for UWP and iOS.

All that is happening above is that when the app is activated because of the protocol that it has registered, it will look at the URL and extract the response code that was returned by Forge. It will then use that response code in a REST API call to get the authorization token and refresh token. If that is successful, we perform a navigation to the next page in our app. Obviously the code isn’t complete as it doesn’t handle any kinds of errors. For the details on how to get the authorization and refresh tokens see the previous post.

And that is it for UWP, just a little bit of code and we are back in our shared code base. Up next will be iOS.